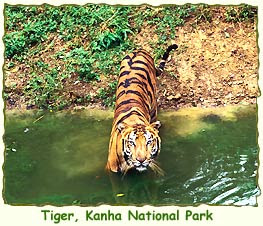 Kanha is Mowgli’s Sweet Home  As per today there are 131 Tigers in Kanha National Park  And, Kipling uncle  gave me a human shape in my own nature and ecosystem. He named me, Mowgli-- I was lucky that in the most natural habitats of Kanha, with the innocent creatures. I was brought up in the laps of mother Wolves, the avuncular Bhaloo-the bear; my wise mentor Bagheera- the panther;
Kaa- the Python; and those rowdy monkeys, the bunder log and Sher Kahn- The tiger.
Rudyard Kipling:-  British author and Nobel Laureate, set his tales of the boy brought up by wolves in the Jungle of KanhaNational Park in  'The Jungle Book'.

Kanha National Park: Kanha National park is located in the Mandla district of Madhya Pradesh and it extends over an  area  of over 1,940-sq-kms. The major feature of this region's interesting topography is the horseshoe shape valley and the whole park area is surrounded by the spurs of the Mekal. By a special statue in 1955, Kanha national park came into being since then, a series of stringent conservation programmes for the protection of the park’s flora and fauna has given Kanha its deserved reputation for being one of the finest and best  administered national parks in Asia, an irresistible attraction for all wild life  lovers a true haven for  its animal and avian  population. Kanha  national park has 22 species of  mammals. Those most  easily spotted are TIGER, Indian hare, Indian  wild dog, the Stripped Palm  Squirrel, Common  langur, Jackal, Wild Pig, Chital or Spotless deer, Barasingha or Swamp deer,  Sambar and black  Buck.

Avian Species: Kanha National Park has some 200 species of birds. Watchers should station  themselves in the hills, where the mixed and bamboo forests harbour many  species and in the grassy forest clearings. Water birds can be seen near the                          park’s many rivulets and at Sarvantal, a pool that is frequented by water birds and the area in front of the museum.

Kanha’s Sal and Bamboo forest ,rolling grasslands and meandering stream stretch over the 940 km. The abundance and wild life species in Kanha national park, forms the core of the Kanha tiger reserve created in1974 under project tiger. The park is only habitat of the rare hard grounder Barasingha.
Hotels/Resorts at Kanha (Cervus Duvaceli Branderi). In 1930s, the Kanha area was divided into two santuaries; Hallon and Banjar of 250kms to 300kms each. Though one of these was subsequently disbanded .The area remained a protected one until 1947. Depletion of the tiger population in the year that followed led to the area being made an absolute sanctuary in 1952.